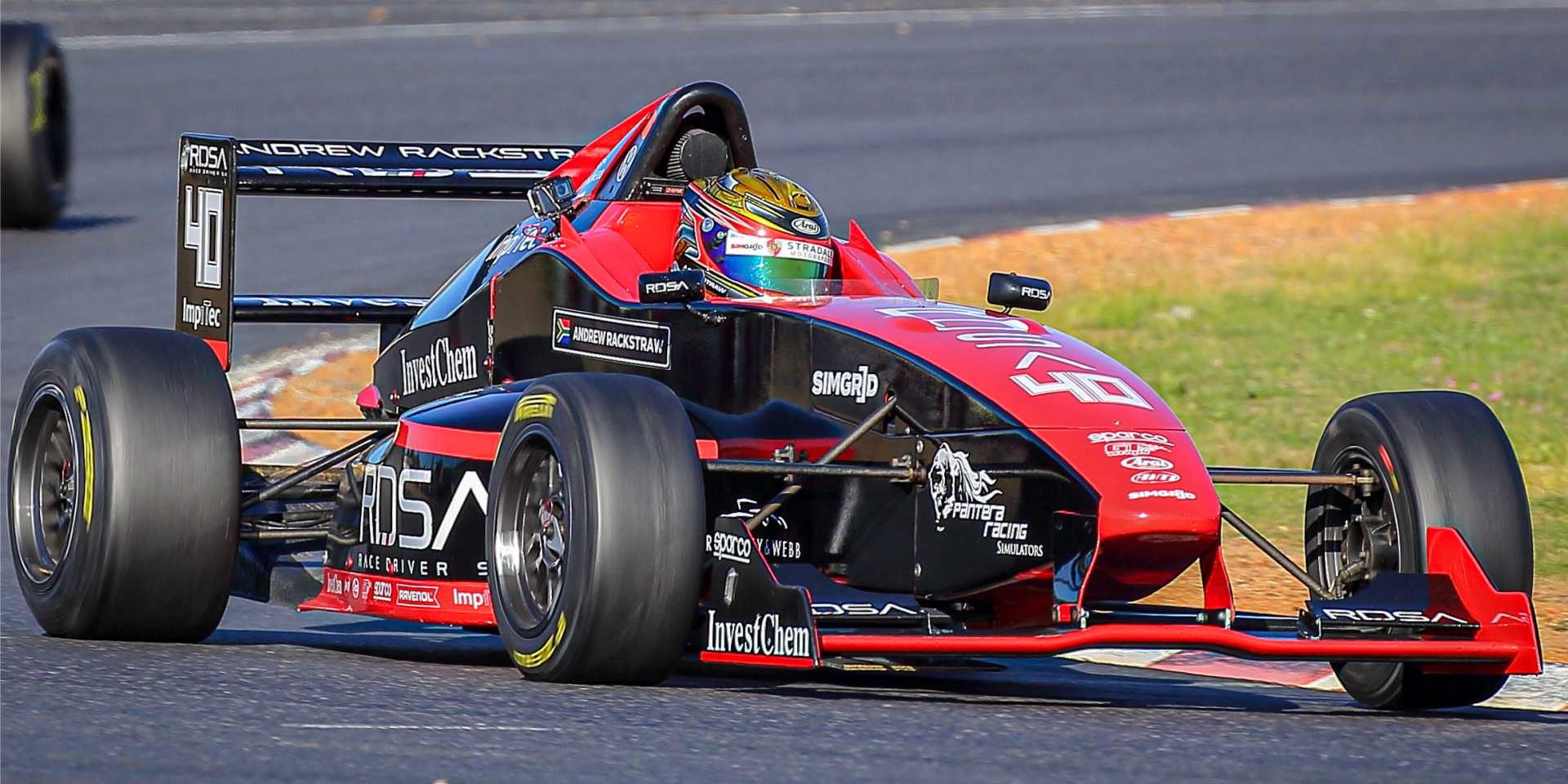 Andrew Rackstraw was back at Killarney this past weekend for another dose of Formula VW action.

Those of you who have been following Rackstraws 2021 campaign will know that he has been flat out on and off the track. It’s been a tough year for the 20 year old who celebrated his birthday this past Sunday. Happy Birthday Champ! Between a crazy racing schedule and a heavy workload with his Digital Marketing course it’s been a rollercoaster year for the youngster.

Unfortunately due to his commitments he has missed a few rounds of the Power Series but this last weekend marked his return to Formula Libre racing, in his mighty Formula VW single seater race car. He stepped into the weekend as the newly crowned South African Investchem Formula 1600 National Champion. It was also the first time spectators were allowed back to a racing event at the Killarney circuit. Finally some light at the end of this Covid pandemic!

Rackstraw missed the whole of Friday practice due to exams but arrived on Saturday morning ready to tackle the challenge. The last time he was in his Formula VW was when he participated in the Simola Knysna HillClimb in which he did very well in his debut at the event.

Saturday morning brought with it, it’s own challenge. The weather decided to pull a fast one with rain showers coming and going. Enough to wet the track for periods of time but then the sun would break through the clouds and the humidity would quickly dry the track. It was difficult to make the right strategy calls.

Come qualifying it was a tricky call but the RDSA team along with Rackstraw made the decision to go on used slick tyres. The Pirelli’s came out of their tyre blankets nice and toasty but were quickly met by the cold track. It took a few laps to warm up but eventually Rackstraw was singing around Killarney at great pace. With no practice at all he was able to qualify on the front row of the grid in second place. Not even 1 tenth off first. A very impressive lap in tricky conditions from the talented driver.

Race 1 was an exciting affair with the weather once again playing games. Slick tyres were the choice again as the cars took to the grid. All lined up and ready to go the lights went out and the race was a go. Rackstraw got a great initial start but had to settle for 2nd as he maintained his position. He tried his best to follow the leader closely but started losing out as the race progressed. It was difficult to make a setup call without any practice and the car wasn’t ideal for the conditions. He was lacking the rear grip needed and on lap 5 made a mistake trying to overtake some backmarkers leading to a small spin in Turn 3. He quickly recovered and returned on track in P3. With only 3 laps left there wasn’t enough time to recover the gap back to the leaders. P3 was still a very respectable finish in the end.

Race 2 was the toughest challenge of the day. The rain really came down and looked like it was going to stay but a late schedule change saw the Formula Libre class get pushed back. Clubmans and V8 Masters went out in the wet and looked like they were on a slippery slide. From their racing the call was to go for the wet tyre to play it safe. However, as Rackstarw lined up for his race it was evident that the track was quickly drying once again and that the rain had stopped. By lap 1 a full dry line had formed making it very difficult for the wet tyres to find grip. The new Pirelli wet tyres have a deep tread which in dry conditions quickly overheats causing the car to feel like it’s floating on the track and not actually biting and gripping to the surface.

This is exactly what happened in Rackstraw’s case as by lap 2 his tyres had completely overheated. The rubber was crying out for help and made it very difficult for the young lad to keep his car on track. In the end the risk was not worth the reward as Rackstraw decided to bring his car home in one piece rather than risk having a big crash. It was a mature decision which saw him still finish in P2. That result gave the RDSA driver P2 overall for the day and another successful result to add to his already impressive tally in 2021.

“It was an amazing weekend to escape. Varsity has been really tough. After such a hard week the best thing I could’ve asked for is to drive the beast of the VW. It was a great weekend to tune back into racing. Especially for this weekend’s upcoming Formula 1600 race at Zwartkops. Thanks to everyone who has made it all possible and for the continuous support.”

What’s next in the life of Rackstraw. Well he is back in Johannesburg next week for the last round of the Extreme Festival at Zwartkops Raceway. As we touched on earlier, Rackstraw already secured the title but will still want to finish the season on a high.

The livestream of the event will be available on Youtube on the 2WheelsTv channel.

Spectators are allowed and tickets can be picked up on Computicket.

If you do go spectate be sure to follow covid protocols and enjoy the racing.