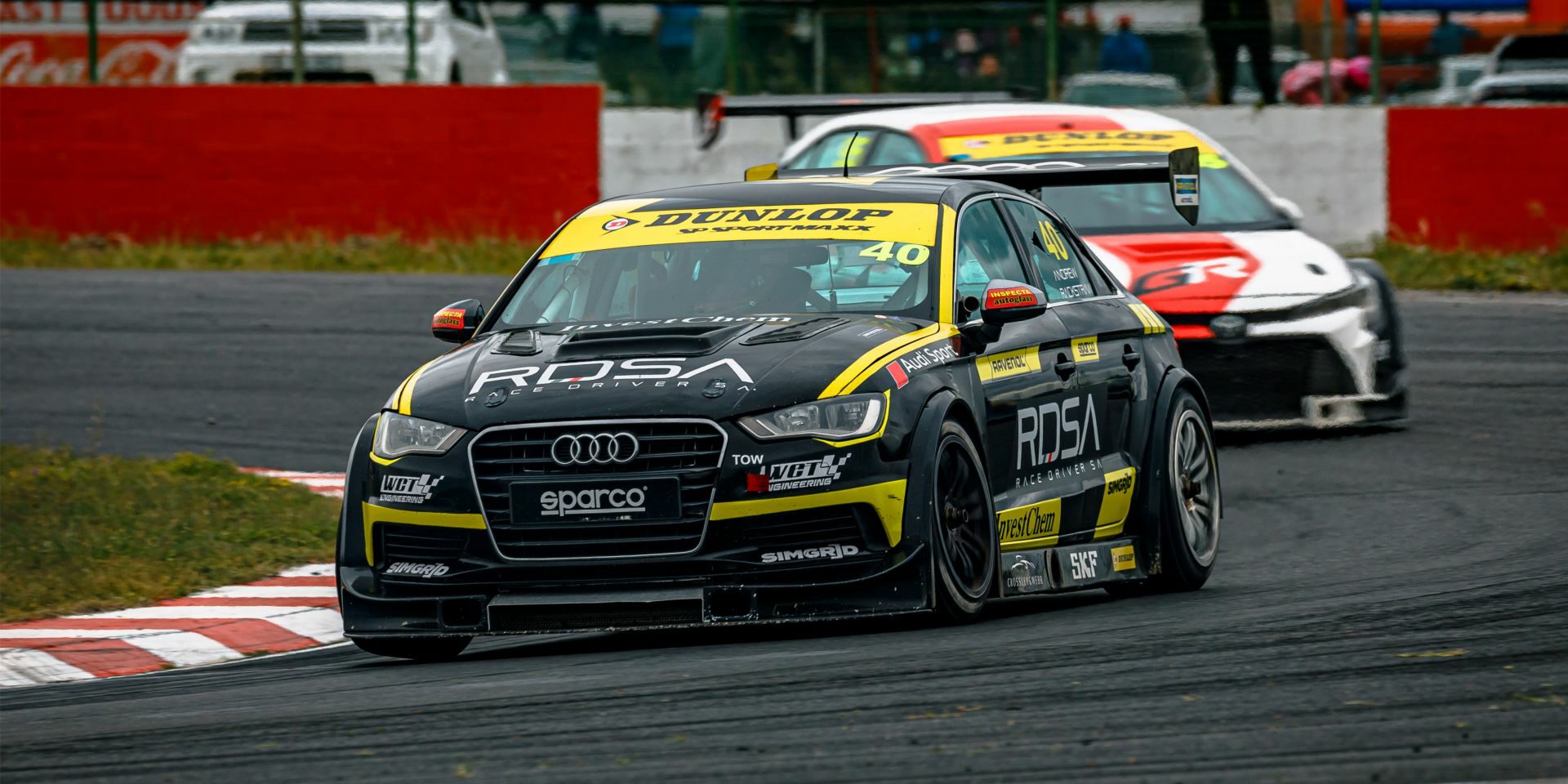 This past Saturday, Andrew Rackstraw did himself and the local Killarney crowd proud with one of his finest Global Touring Cars performances to date, missing out on his first overall podium by the narrowest of margins.

The 20-year-old Audi S3 driver was the highest finishing Capetonian in the Global Touring Cars field and drove his heart out in front of the packed grandstands.

There’s nothing quite like racing in front of your home crowd and with his friends and family cheering him on, Rackstraw was determined to bring home a good result.

Friday practice kicked off on a good note which is something we have not been accustomed to this year. The reliability gremlins seem to have almost vanished as he got a full day of clean running with no issues.

PRACTICE GREMLINS A THING OF THE PAST

Out of the blocks, in Practice 1 Andrew found himself only 4 tenths off the quickest time in a very close and hotly contested field. Generally, we would see the Audi S3 way off the pace but it was a sign for greater things to come. In Practice 2 all the teams put on new tyres for their cars and sent their drivers out to set their best times of the day. Rackstraw has done very limited mileage in his first year and has always struggled to get the setup balance right on new tyres but the improvements were clearly visible. He held on strong with P5 and only 6 tenths off the ultimate pace shown.

By Practice 3 he was really showing the potential in what is still the older and heavier chassis and moved himself up into a neat P4 and much closer to the pace up front. With a very positive day of practice, Rackstraw was feeling very optimistic about the qualifying and race sessions on Saturday.

Unfortunately, qualifying wasn’t meant to be as the steering pump managed to work itself loose causing the steering to fail. It was a real shame and Rackstraw never really got to unleash the full potential of the package that the team had worked so hard to provide. He had to settle for P5 with some work to do in the upcoming races. After some quick work and a good look over, the car was all ready for full attack in Race 1.

Race 1 was a really solid showing as the RDSA Audi showed it can run right up there with the ever-fast Toyota’s. His fastest lap time was only 3 tenths off the best and came home in a respectable P5 crossing the line only 1.4 seconds behind the leader.

Race 2 was by far the best race of the day for Rackstraw who was in a very intense battle for P3. He tried his very best to grab the last podium spot and had a great battle with one of his teammates. The pair were glued together for the majority of the race and it came down to a drag race to the finish line. Rackstraw just missed out on what would have been his second podium finish in the series. Epic racing for the youngster!

Overall Rackstraw had to settle for P4 on the day but definitely deserved a bit more. With the car really coming together after a tough season only time will tell if the momentum will sway in his favour as the team head back to Zwartkops Raceway for the final race of the season.

“What an incredible race weekend. “

“The team and I made a massive leap forward this weekend and mixing it with the top guys in the old girl was very satisfactory.”

“As a team we can be incredibly proud of what we have achieved this weekend, finishing P4 overall just missing out on P3, which came down to a titanic battle in race 2 with Mandla and me.”

“I have to say a huge thanks to all the supporters that came in full force to support, there’s always something special about your home race.”

“Another huge shoutout has to go to all my sponsors, Sparco, Investchem, Ravenol, RaceBook, RDSA, and most importantly my amazing family for all their continuous support.”

“I look forward to the final round at Zwartkops,” said Andrew.

Thank you again to the amazing crowd who cheered Andrew on. We hope to meet and encounter some more fans at Zwartkops for the finale of the 2022 GTC season. Be prepared for a proper showdown where Andrew Rackstraw will be there to give it his all once again.