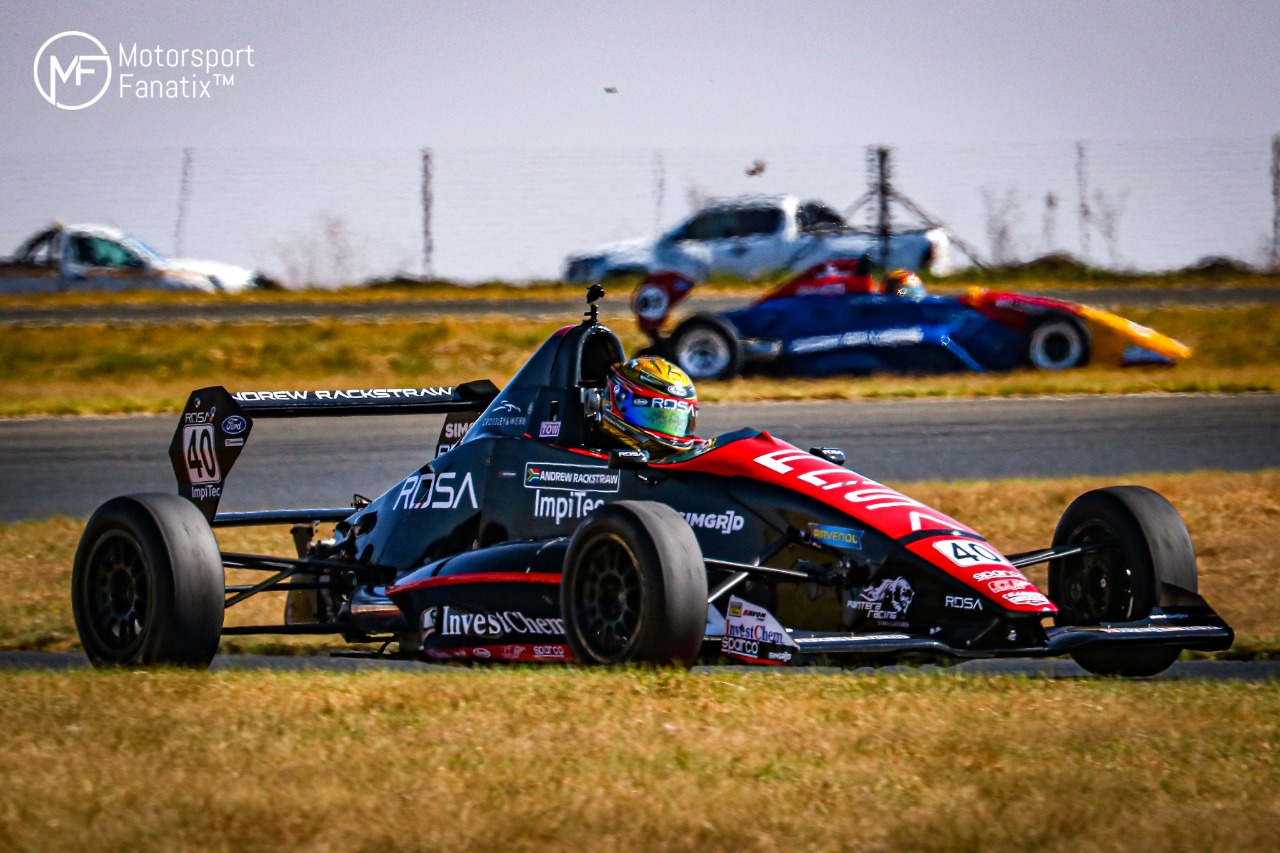 Winning any championship is an enormous achievement. Winning the Premier Single Seater category in the country is off the charts.

He wrapped the title up this weekend in some style too.

Rackstraw, who has been near untouchable in this record breaking season, put on another masterclass during the penultimate round at Red Star Raceway on Saturday.

Friday practice went exactly to plan as Rackstraw executed on his deliverables, topping the time sheets in 2 out of the 3 sessions. A perfect start to race weekend. Hendrik Lamola can be a proud Engineer, his hard work in the workshop putting together Rackstraw’s title challenging chariot all season long, has seen Rackstraw able extract absolutely everything out on track. The car was again on rails this past weekend. Seeing a driver in sync with his machinery is truly a great site and credit must also go to RDSA team boss Claudio Piazza Musso, who always makes sure Rackstraw is fully prepared for the weekend ahead.

Anything is possible in motor racing and as Saturday loomed, Rackstraw looked as pumped as ever to secure the Championship, having had his win streak broken at the previous round.

Qualifying was an intense and exciting session, All the drivers having the option to fit new tyres to their cars. Rackstraw opted for the fresh rubber and duly maximised the additional grip in full send mode. He was on another level and managed to get pole position by 0.791 over his nearest rivals. He was also the only driver to get into the 1 minute and 57 seconds time bracket. His 2nd best lap was good enough to give him pole position for race 2 and another Championship point to his impressive tally.

After his qualifying heroics, all that was left for Rackstraw was to lead his races from start to finish, a challenge he relished.

After a perfect start procedure in Race 1, Rackstraw never needed to look back as he romped away to victory, leading every lap, setting purple sectors and crossing the line nearly 15 seconds clear of 2nd place.

Race 2 was a carbon copy of the previous race. Rackstraw was on another level out on track and came home 16 seconds clear of P2. A number of the greats have claimed their maiden Championships in fine style, Rackstraw was no different this weekend.

Andrew Rackstraw has worked incredibly hard this year, juggling between his studies and a busy racing calendar is no joke. He fully deserves every ounce of his success. It is fantastic to see the next generation of drivers who started in Karting stepping up and now notching their names among the many National Champions South Africa has crowned. One can only watch on in great anticipation as this young man’s career takes its course.

It is well known that the winner of the 2021 Investchem Formula 1600 title would be littered with prizes, something that makes this series so attractive. As 2021 Champion, Rackstraw pockets R250 000, a test drive in a 2021 GTC car and a test in a 3.5 litre Formula Renault. Not too shabby. A massive thanks must be said to Investchem for funding the prizes in what is a difficult financial climate and for all they do for the sport.

“What a perfect weekend. I couldn’t have asked for anything better. Pole position fastest lap, two race wins and the lap record! An amazing end to an amazing weekend.”

“We have worked so hard the entire year to secure this championship and all the hard work finally paid off. Definitely hasn’t sunk in yet, but I have to say a massive thanks to Investchem, RDSA and Hendrik for an amazing car all season long.”

“And of course the biggest thanks has to go to my dad for his continuous support and belief in me.”

“To all the supporters across the country, thank you for the continuous support! I appreciate every single message I have received, thank you!”

“Last but not least I want to say a massive shoutout to the sponsors who have stuck with the team throughout the year, Investchem, RDSA, Sparco, Ravenol, SimGrid, GT Wraps, Impitec and Crossley & Webb! It’s been an honour to be associated with you throughout the season.”

If you feel like you missed out on the Rackstraw masterclass as he piloted his Ford 1600 Duratec single seater to the 2021 title, don’t worry, you can relive all the fast paced action below.

The final round of the Championship will be held at Zwartkops Raceway on the 23rd of October and even though the winner has been decided, the fight is still on for the podium spots and Rackstraw will again need to be at his very best to fend off the challenge from those behind.