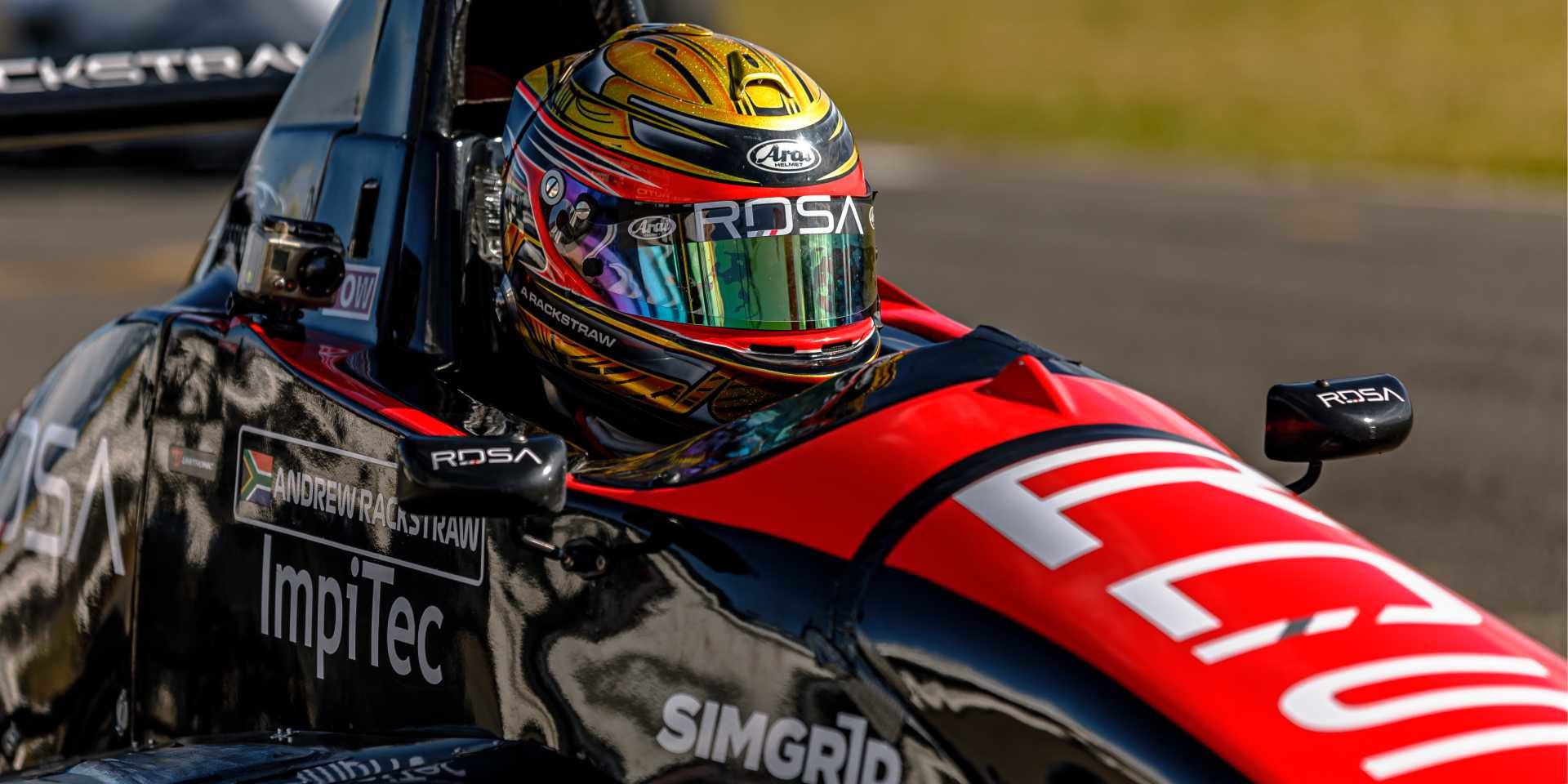 Rackstraw edges closer to the title in East London

Andrew Rackstraw strapped in for National duties over the weekend in his beautifully designed RDSA Formula 1600. He was absolutely buzzing to be back in the car this past Saturday at the return of the 2021 Extreme Festival Series.

The last round was nearly 3 months ago so you can’t blame him for being eager to hit the track again. What better way to make a return than at the infamous Grand Prix circuit of East London. The circuit is famous for being the fastest track in the country with super long straights. Corners like Potters and Rifle bend, really take some grit and bravery as most cars take these corners flat out. In an Investchem Formula 1600, that means spotting your apex and committing to the corners at speeds over 240kph!

Rackstraw had never raced in East London before, adding to the challenge he would be facing come race day.

The young Capetonian quickly found his feet, but this is to be expected with the 2021 season he is having so far. He punched his way into the top 3 of every practice session clocking some blistering times. As Friday came to a close it was time for the team to debrief. Rackstraw, who has been racing since the age of 11, has a really good feeling for what the car is doing on track so some final adjustments to the setup were made for the ever important qualifying session that would be held on Saturday morning.

As the sun rose on Saturday you could sense the excitement in the air. The rain decided to stay away leaving a clear dry track ready to be hammered on by some speedy single seaters.

Rackstraw got himself in a good position on track and set the benchmark from the word go. It was nail biting stuff as each lap he was lighting up the timing screens with purple sectors. He drove like a man possessed as he took pole position with a stellar time of 1.25.187. Second place was 0.535 tenths behind. A truly commanding performance in qualifying saw Rackstraw claim another important point towards his Championship hopes.

Race 1 was a cracker of a race. Rackstraw got a hint of wheelspin off the line as the lights went out. This allowed his championship rival to take the lead onto the long straight and into T1. Rackstraw tucked behind in the slipstream and was able to get a run down the hill into Cocobana where he went for the outside. Both drivers pushed each other to the limit on late braking and it was Rackstraw who came off worst and he was edged off the circuit. When he returned back onto the track he found himself in last place with 7 laps to make up the positions.

In his epic comeback Rackstraw was able to set the fastest lap of the race and fight his way back to sixth position. Shortly after his off the car decided to cut out, quick thinking saw him reboot the car and get going again. Adding to the achievement of fighting back up to a good points finish.

Race 2 was a lot less dramatic as Rackstraw coasted through for a lights-to flag finish for the win. Setting the fastest lap and bagging a nice chunk of points for that ever so important championship.

“I was extremely happy with our pace on Saturday. It was unfortunate what happened in race 1 but that’s racing sometimes. We showed some great pace and came back even stronger to win the second heat.

I have to say a massive thanks to everyone who has helped me this far. I have had an amazing team with lots of support. We are keeping our heads down and more focused than ever to try and win this championship!”

It was the first time in the 2021 season that the young man didn’t take the top step overall. He had to settle for 3rd overall for the day but a mature performance that he can still be surely proud of.

In terms of the Championship, Rackstraw carries a 22 point lead over his nearest rival with only 2 rounds left to play for. If he manages to outscore his fellow drivers by 2 points in the next round at Red Star Raceway he will take the Championship win with 1 round in hand still.

Stay tuned for the next round of the Investchem Formula 1600’s at Red Star Raceway which will take place on the 25th of September.

Be sure to tune in as Rackstraw makes his debut in his RDSA Formula VW at the Knysna Simola Hillclimb this coming weekend. Something very different from the circuit racing he has been doing and no doubt he will enjoy. Watch out for the livestream of the event and send your support.