Red Star Raceway started life as a bike-only track, but this weekend it played host to the Extreme Festival. This is the premier race meeting for main circuit motorsport in South Africa, in which the top racing drivers in the country fight it out for honours across various classes.

Andrew Rackstraw had a great 2019 season in F1600 and was ready to keep that momentum going in 2020 when lockdown struck. It’s been the weirdest year for everyone, but Rackstraw has kept his head down and his driving sharp by participating in Formula Libre and karting events at Killarney.

In this invitational event, he sent a clear message to his competitors: watch out for Rackstraw in the full-blown championship in 2021.

In free practice, Rackstraw was consistently in P2 behind the vastly more experienced Julian van der Watt, an ex-F1600 champion and USF2000 international driver. In qualifying, he converted consistent pace into a scorching qualifying lap, taking pole position by a magnificent four tenths of a second.

That’s seriously quick. His qualifying lap was almost a second quicker than anything in free practice. It’s a reminder of the good old days when Ferrari used to hold back in practice, compared to these days when they are just genuinely slow.

Unlike Ferrari, Rackstraw carried the pace into the race as well.

Starting from pole, Rackstraw got a decent start but van der Watt pipped him to take P1. Rackstraw was losing two tenths a lap to van der Watt but he dug deep and found his qualifying form. With some blistering laps, he closed the gap and put the pressure on van der Watt.

It was so close. With a lap and a bit to go, he was in van der Watt’s slipstream down the back straight and went for a brave move around the outside. He almost made it stick, but van der Watt closed him out and he had to settle for P2.

It could’ve been P1. He knew he had the pace to win. It didn’t hurt to set the fastest lap in Race 1 either, securing pole position once more in Race 2. 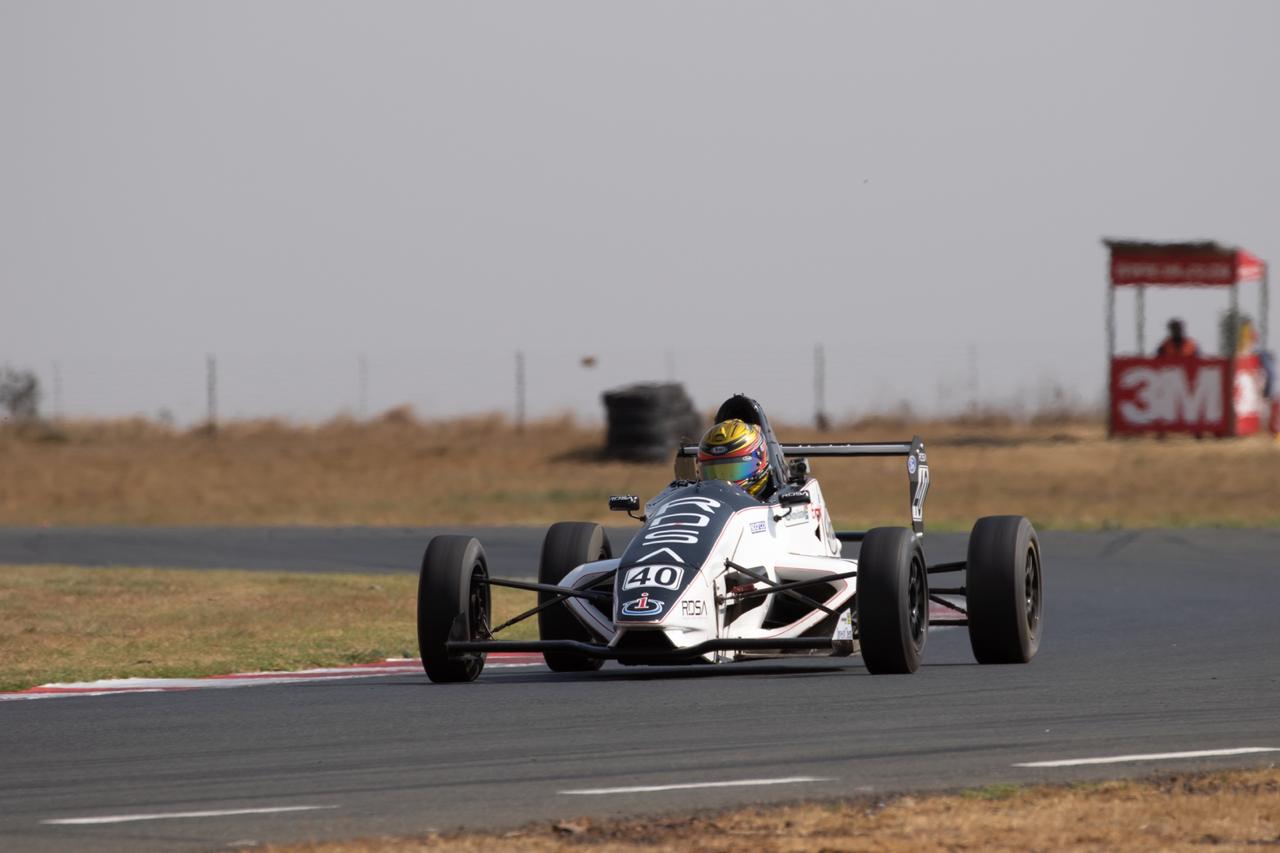 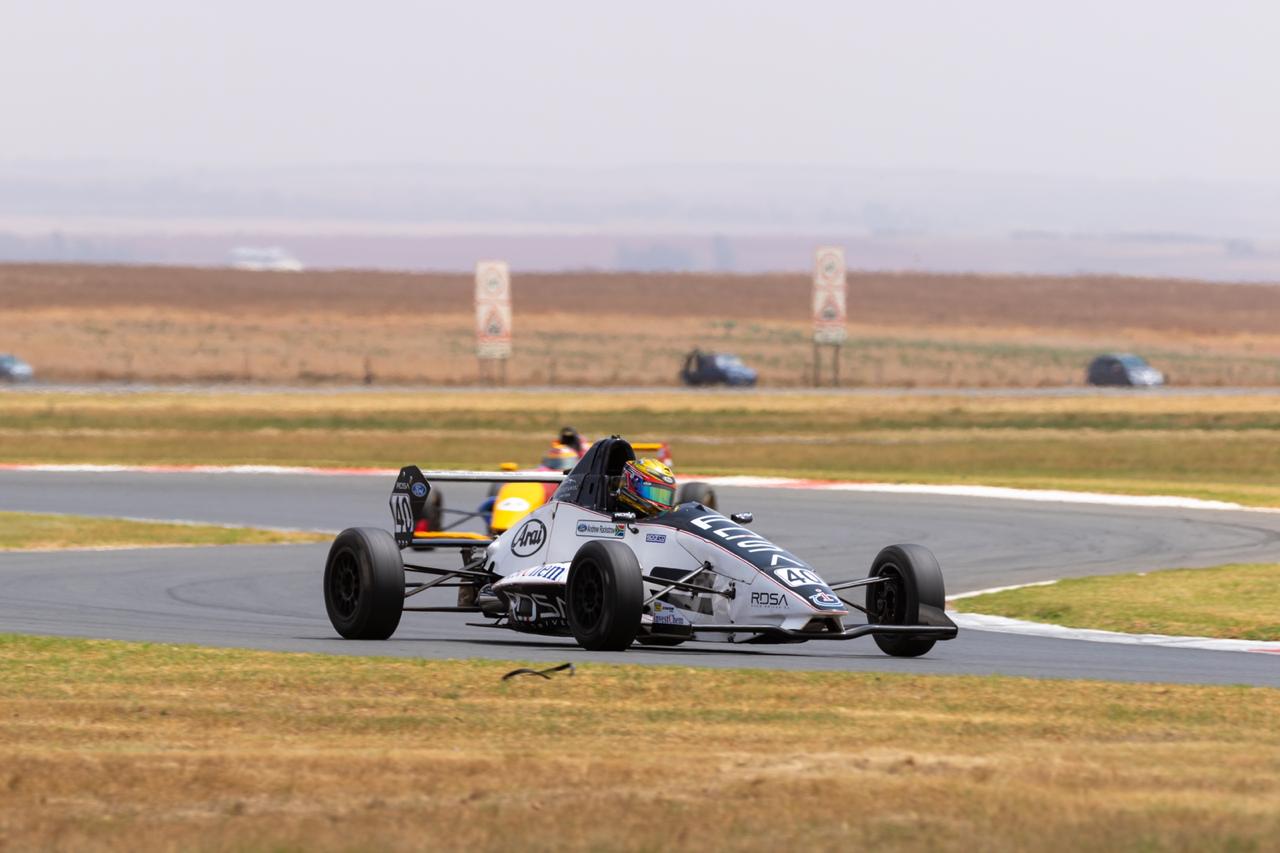 When the lights went off, Rackstraw pointed his car with clear intention to close van der Watt off. It worked – the start was executed perfectly and Rackstraw was still leading after Turn 1. Of course, van der Watt returned the Race 1 favour and applied the pressure from behind.

Any racing driver knows that defending is harder than chasing, but Rackstraw drove defensively and consistently to make sure van der Watt became well-acquainted with the sight of his rear. The pressure wasn’t over yet though, as the safety car was deployed for an incident just as Rackstraw’s tyres came up to temperature.

The safety car has a way of making a race fantastic for spectators and daunting for the leader. Thankfully, Rackstraw kept his cool and restarted perfectly after leading the field to the line. He launched his F1600 midway through the final chicane and scampered away.

With the green flag waving and racing underway again, Rackstraw found his rhythm once more and started to build a gap. He took the win in the end by almost 5 seconds after van der Watt ran into issues and dropped down the order.

As his family celebrated while watching the livestream from the Cape, Rackstraw reflected on an incredible performance in the premier open-wheel format in South Africa.

“It’s awesome to have Julian here, I learned a lot from him with all of his experience. I kept building on that throughout the weekend. I couldn’t capitalise on the start in Race 1, but I was so happy with the win,” the gracious young star concluded.

A big thanks needs to go to Claudio Piazza Musso from RacedriverSA for all the help and guidance and also to Investchem for this awesome series and exciting racing.

Carbs and Coffee is immensely proud to be associated with Andrew Rackstraw and we fully expect him to carry this form going forward.