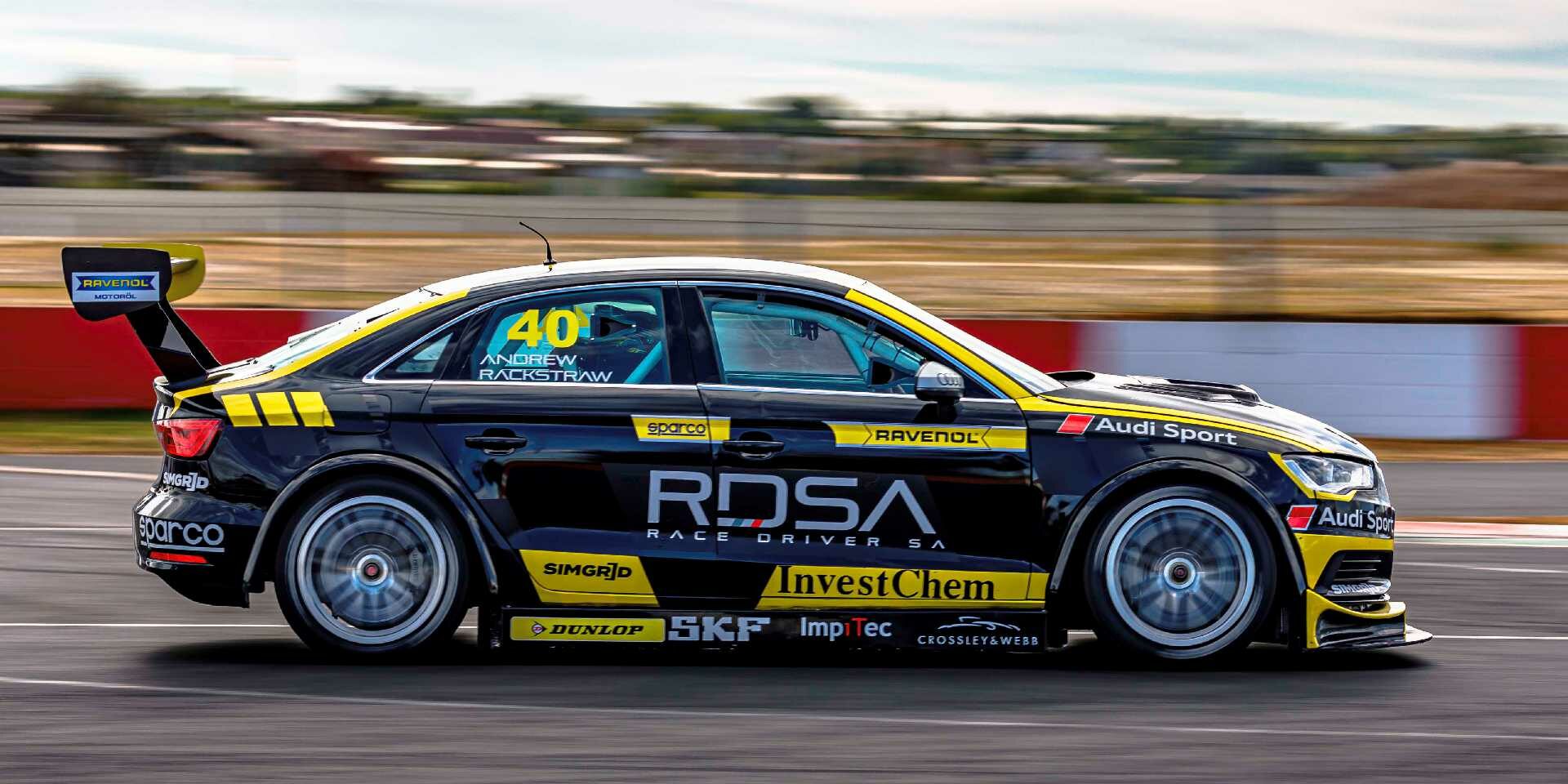 Andrew Rackstraw impressed the Cape Town crowds at Saturday’s opening Global Touring Car round with a debut performance that will be spoken about for some time yet.

The incredibly talented Rackstraw showcased his natural abilities behind a steering wheel and proved how quickly he can adapt to a new car, team and environment. Talking about the team, WCT Engineering did a fantastic job to work through all the teething issues with a car that hadn’t raced since 2019.

The RDSA Audi S3 looked stunning on track and definitely added some character to the field come official practice. As mentioned above there were some mechanical issues that reared their heads. The team worked through it methodically together with Rackstraw, whose feedback helped them to pinpoint the issues. In practice 1, it was a turbo issue where the wastegate was malfunctioning causing the car to lose boost. WCT Engineering made light work of the problem and made sure the car was ready to go in practice 2.

Issues followed in practice 2 when it was found that the car was over fueling by 15% causing the car to lose up to 15 kilowatts of power. Rackstraw ended the session 2.803 seconds off the best time set in that session. Staying calm, he allowed the team to attend to the car. His positive attitude would pay off because come practice 3 the car was finally behaving itself. This gave Rackstraw the chance to finally settle into a rhythm and set a very respectable lap time of 1:16.502. As the session came to an end, the timing sheets saw him finish the session ahead of the other Audi on track and only 0.709 tenths off the leader. It was a massive leap in the right direction for driver and team as most of the Friday they had been closer to 3 seconds off on average.

“This weekend was a real rollercoaster, but I enjoyed every second of it. Throughout practice and the races we had been struggling with boost issues, preventing us from showing our true potential, it also cost us valuable laps in the car. Taking the opportunity away to really get on top of our car setup.

Race Day arrived and you could sense the excitement. It’s crazy to think that Saturday was the first Extreme Festival Round in Cape Town in the last few years where the gates were open to spectators once again. If you ever need proof that South Africans love their motor racing then you should have seen how the spectators flooded into the gates with the supporters filling up the stands around the entirety of the track. For Rackstraw, the home support definitely motivated him, providing that extra confidence boost going into his first GTC race day.

At 9:55 am, the GTC cars fired up and drove out for 25 mins of flat-out qualifying precision. Rackstraw was focused and composed as he headed out for his first-ever taste of timed GTC action. Whatever he had for breakfast clearly worked because he was on it from the get-go. The car was hooked up on the new tyres and Rackstraw, looking more at home in the car, set a personal best of 1:15.766. To give you an idea of how fast that is around the 3.2670km track he averaged a speed of 155.231km/h. Incredible. His quickest time earned him P7, a mere 4 tenths off the pole time.

“I loved the challenge that the weekend presented and the team and I really persevered. Unfortunately, we had some more slight issues in qualifying with intercooler sprayers not working which robbed us of power down the straights. I was surprised that even with the issue we were able to get as close as we did with a P7.”

A master of standing starts during his single-seater escapades, Rackstraw needed to draw on his karting experience as the rolling start for race 1 dawned. It’s often overlooked how important it is to retain boost in the turbocharged GTC cars and that goes for the race starts too.

Rackstraw had a good start and was hanging on to the main pack in the first couple of laps before a red flag came out. With the debris cleared it was back to racing and again Rackstraw made up ground at the re-start going from P7 to P5. It was all going so well until he suffered a sudden loss of power. This left him no choice but to splutter his way back to the pits. It was race over for him. The DNF was later put down to a miscalculation in the fuel load meaning he ran out of fuel 3 laps from the end of the race, a tough pill to swallow, but with race 2 on the horizon, there wasn’t time to mope around.

“Race 1 we managed to get up to P5 until we underestimated fuelling with the red flags and ran out of fuel. I brought the car back to the pits but the mindset was already on how we could maximize Race 2.”

Race 2 was magnificent. Rackstraw started the race in P9 but a tangle ahead of him going into turn 3 of lap 1 saw him move up to P5 before the red flag was waved for the second time in as many races.

Racing resumed and Rackstraw had the bit between his teeth. In what has to be one of the greatest debut premier class drives ever witnessed in South Africa, Rackstraw piled on massive pressure for the VW SA Factory drive in his sights, eventually forcing the error out of turn 1. Rackstraw pounced. He threw a dummy going into turn 2 and squeezed his car up the inside of turn 2 to complete a classy overtake. He then put his head down again and hunted down the next Volkswagen further up the road. Rackstraw could sniff a podium in his 2nd ever GTC race as he pushed on, edging closer and closer to the car ahead. It required some heroic driving to get as close as he did, and he crossed the finish line taking an epic P4 just 0.4 tenths off of the works VW ahead.

After some further action was taken by the Clerk of the Course, Rackstraw would see his P4 finish promoted to a P3! His first podium in the series and on debut to boot.

“Race 2 saw us start last, and come all the way up to P4, which was a massive effort from everyone. The on-track battles were absolutely amazing but it was really difficult for me in the car as we still didn’t have the straight-line speed of the cars around us. I was over the moon with my P4 finish which after some penalties were handed out, awarded us with a P3!”

“Looking back on the weekend, it definitely was a big jump in terms of pressure. There’s a lot of expectation and responsibility on your shoulders when you get strapped into a GTC car. But I’m thankful that I was taught from a young age to take it step by step and to keep moving forwards. My team and I kept to ourselves, avoiding all the on-track drama and keeping our car in one piece. This approach is what saw us have a successful Round 1 at my home track.”

Round 2 of the Extreme Festival will be at Zwartkops Raceway on the 23rd of April. Much like Round 1, there will be plenty of anticipation to see Rackstraw on track with the best once again. Fans will be keen to see if the hard work pays off for him and his team.

“Looking ahead, the team and I will work extremely hard to be even more competitive for the races coming up. If I look back at the results from Saturday, I can be really happy of how well we did considering the problems we had and the sheer quality of the drivers lined up on the grid with me. It’s the big leagues for sure but I’ve never been more ready for what lies ahead.”

“Before Zwatkops, the team and I will definitely revisit the drawing board to sort out the mechanical issues we faced at Killarney. Can’t wait!”

“I have to say a huge thanks to Investchem Chemical Logistics and WCT Engineering for the hard work throughout the weekend and all the work behind the scenes.”

“To all my sponsors, RDSA, Sparco, ImpiTec, Ravenol and Chemical Logistics thank you so much for the continuous support.”

“Most importantly thank you to my mum and dad for the continuous support and belief in me. Your ongoing support for what is my dream means the world to me.”

In the meantime be sure to check out Andrew Rackstraws’s website and social media pages for updates. He will be getting back into his Rotax Senior Max kart for Round 2 of the WPMC Regionals this weekend so there’s more racing action just around the corner. If you are in Cape Town come down and lend your support, even GTC drivers need to jump into a kart every now and then.