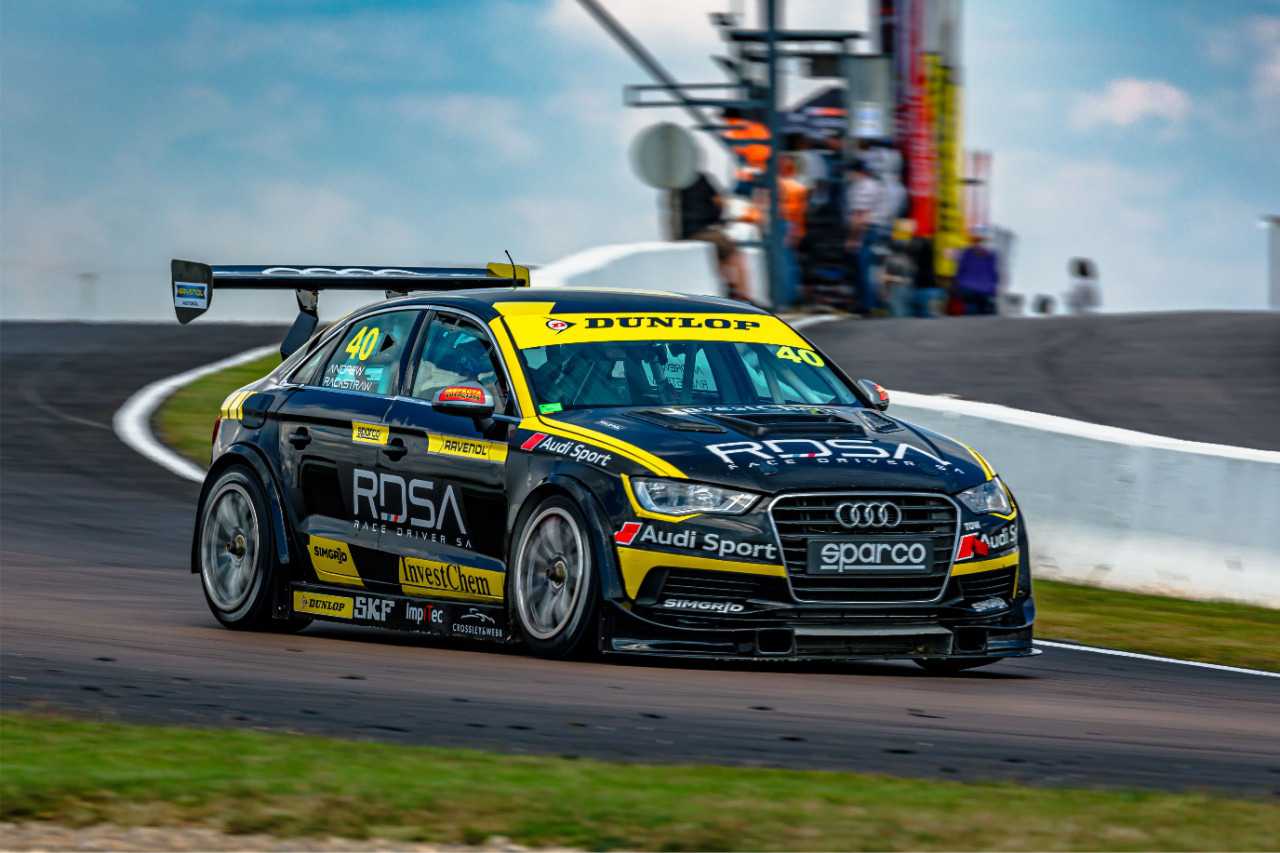 Rackstraw Shows His Class At Zwartkops

It’s no secret by now that Andrew Rackstraw is one of the hottest prospects in South African Motorsport. The GTC rookie has been a great addition to the series and his results have been very respectable considering he is in the older chassis which is 70kg heavier than the newer cars.

Practice was a tough task as problems kept exposing themselves. The Audi has struggled with top end speed but more so in the interior where the air is thinner due to the altitude. The setup also wasn’t ideal but that’s half the challenge for the driver, to develop the car and setup to make it quick. Rackstraw worked well with his WCT team, who always go the extra mile for the youngster. After the last session on Friday, the slave cylinder for the clutch let go and the team stayed late to dismantle the gearbox to replace the faulty part.

Qualifying also revealed that the car is not competitive on new tyres. It was a struggle but again the driver and team showed perseverance and kept a positive mindset to move forwards. This mentality really helped them as Race 1 was a much better result.

From the back of the grid, Rackstraw was able to carve his way up to what would eventually be P5 at the finish line. He extracted absolutely everything out of his car and gave it his all for another great result. It’s clear that Rackstraw is punching well above his weight with the equipment he currently has available to him. Once again a consistent finish and some more good points to add to what is already becoming a successful rookie season.

If you’re not sitting down for what’s up next then I suggest you do, because Race 2 was phenomenal! It was some of Rackstraw’s best driving yet. Race 2 always brings some extra flavor due to the fact that the top 6 from race 1 are reversed for Race 2. So Rackstraw who finished that solid P5 then started on his first front-row start in GTC with 2nd on the grid.

P2 starts on the inside of T1 at Zwartkops and Rackstraw made good use of his track position off the line. Holding onto P2 they then went down hard onto the brakes into T2. Rackstraw became sandwiched as a Toyota went around his outside, while a VW dived on the inside. Both cars out braked him but went too deep to get a good exit. Rackstraw was privy to this and made sure to hit his apex to get the best possible exit. From there he was able to get the cross over on both cars and it turned into a drag race through T3 and down to T4 as he went side by side with one of the Toyotas. Rackstraw held his inside line and as they went through T4 he managed to run his car out wide, squeezing the Toyota which had to concede the position. It was a brilliant piece of racecraft!

From there he was able to hold onto a strong P2 for the majority of the opening laps. It looked as though the setup changes to the Audi were finally paying off. Unfortunately, it all came undone as the pace of the car began to fall off in the 12 lap race. It was later discovered that the shocks in the car were what caused the fall off. The oil in the shocks was old and over time they would heat up and further into the race they would not be working at their optimum causing the handling of the car to massively vary from the start of the race.

As the pace dropped off, Rackstraw got absolutely swamped by the chasing pack. In 1 lap he went from 2nd down to 6th as things got a bit too close for comfort in Turn 8 with one of the Gazoo Toyotas. Rackstraw was forced wide and lost out to multiple cars who had all lined up behind him. From there he was able to bring the car home in P7, staying mostly out of danger. The battle scars on the Audi were noticeable but definitely not as bad as some of the other cars that had been involved in the shenanigans. Thus the S3 Audi has been nicknamed “The Tank” for its robustness.

Overall Rackstraw managed to grab a P5 finish, avoiding any penalties and putting those ever-important championship points on the board.

“This weekend was nothing but eventful. We had issues the whole weekend with shocks that I had to drive around. I knew I just had to maximize the equipment we had. I tried to stay out of trouble as much as possible which paid off big time in the end, resulting in a P5 for the day. I want to say a massive thanks to Ian Schofield, Stuart Thompson and the rest of the WCT Engineering team for their persistence and endless hard work. Also a huge thanks has to go to all my sponsors, Sparco, RDSA, Ravenol, Investchem, RaceBook, SimGrid and Crossley & Webb. As Well as my family for the continuous support.”

A great weekend overall and one where Rackstraw can walk away with his head held high. GTC’s technical staff will also be looking through the data from Killarney and now Zwartkops to adjust the Balance of Performance between the different cars.

The Audi which has definitely been the slowest car on the grid might see a huge increase in performance and that is very exciting for Rackstraw who has tasted victory in Port Elizabeth, where Round 3 will be hosted. Hopefully, this adjustment to the performance will give the talented driver a car that is as competitive as the current generation cars.

On to the next one!

Rackstraw will be racing again this upcoming weekend in his new CRG Rotax Senior Max kart in what will be the first Rotax National of the year at his home track in Cape Town. Let the racing commence!