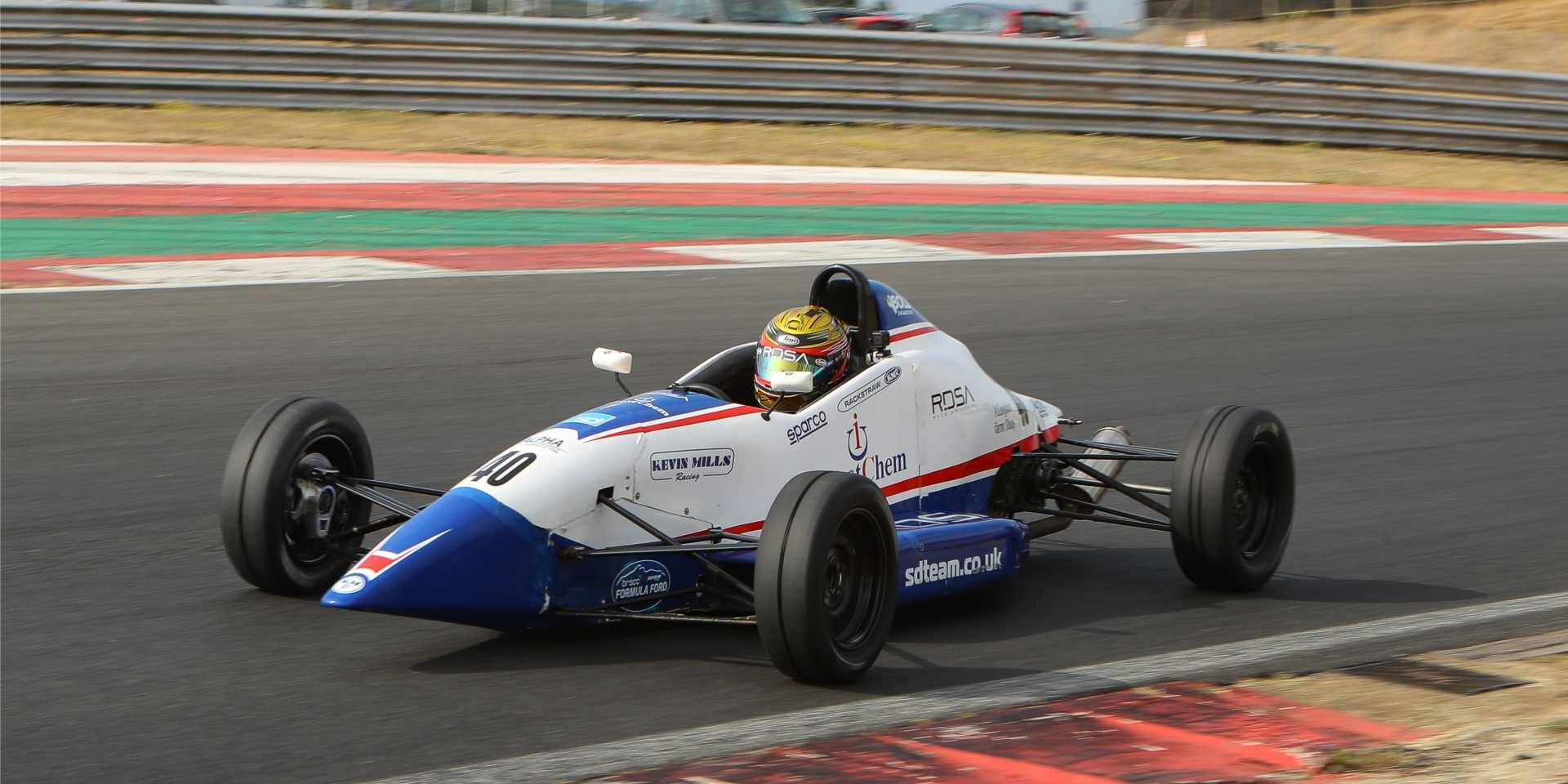 Andrew Rackstraw pulled off a remarkable weekend of racing in Norfolk at the Snetterton Circuit.

As the only South African guest on the grid, he punched well above his weight and really showcased his class with some brilliant racecraft. His pace was also super impressive considering it was his first outing at Snetterton and the first time he had been back in the car since April.

He ran in the top 10 consistently all weekend long and even in his first practice session showed his skills by finishing only 0.5 tenths off the fastest time set.

An apparent prelude to what was to come…

On Friday there were 4 practice sessions in which Rackstraw could learn the track and get himself in the groove. As mentioned above, straight into practice 1 and Rackstraw was already on the money. Lapping consistently and proving that South Africa is still right up there for breeding motorsport talent. Just to note, Rackstraw is one of 3 South African drivers who have competed in the British Formula Ford National Championship this year, as the local series Investchem Formula 1600 looks to encourage the drivers to take the leap overseas to test themselves.

Friday ended off with the youngster sitting in the top 5 and he managed to work well with his team and teammate on track. At International level, it’s important to gel with your team and if you weren’t any wiser you would never have said that Rackstraw was a guest, but rather one of the resident drivers. He fits in so well with the amazing Kevin Mills Racing Team who pride themselves on their results and professionalism.

Saturday morning dawned bringing on the qualifying session which would prove to be an important session. Rackstraw gave it everything and managed to put himself on the 3rd row of the grid in P5. A mighty effort for the South African Champ.

Soon enough it was lights out for Race 1 and Rackstraw timed his start to perfection as he launched off the line. He had his elbows out heading into T1 while holding onto his position.

It was short-lived due to the closeness of the racing between the drivers and soon enough he was dropped to P7 where he held onto the train. It seemed as if the engine overheating problems that the car was suffering during the weekend would start to hamper Rackstraw’s race but he never gave up. He kept on pushing and with 6 mins left in the race, he managed to sneak the car up into P6 and was right on the gearboxes of the 2 cars in front. The 4 cars including Rackstraw jostled it out as they fought for P4 and it would eventually be P5 as he crossed the line. This concluded Saturday’s racing with 2 races coming up on Sunday.

On to Race 2 and the first race on Sunday, what a nail-biter it was! As the grid lined up for the start it was P5 once again for the Cape Town driver. Lights went off and once again a good launch saw him maintain his position going flat out into T1. As the race progressed, Rackstraw stayed on the hunt and was all over the driver in front. With about 5 mins left he finally launched his track and managed to go up into P4 with only a couple of laps to go. From there it was all about keeping an eye on his mirrors as a 3 car pack quickly formed up behind him. The drivers tried their best but Rackstraw remained resolute in his defence and held on to cross the line just half a tenth ahead of 5th to claim 4th place!

Race 3, the final race of the weekend saw Rackstraw start from P4 due to a bit of a reversed grid start. This time the car bogged down at the start and was quickly dropped by the drivers around. From P4 to P6 going through T1. As they hurdled down to the hairpin for Turn 2, Rackstraw found himself in a 3-wide battle as they exited the corner. It was super exciting racing to watch as the drivers flew past!

As the laps counted down Rackstraw found himself falling off the top 5 and he continued to manage that engine overheating problem which hampered his top speed as well. He would later drop to 8th but did his best to stay in touch with the fight ahead. His efforts paid off when 2nd and 3rd had a tangle with little over 2 laps left allowing him to move up to P7. He kept the pressure on but the cars ahead used their straight-line speed advantage to pull away. With the guys ahead pulling away and the gap behind being big enough, Rackstraw decided to back it off to make sure he could finish the race as the engine was nearing 100 degrees celsius. His decision worked in his favour with P7 being his finishing position for the third and final race of the weekend.

“What an unbelievable weekend!”

“This was my first time at Snetterton which I absolutely loved due to it being such a technical circuit. A proper driver’s circuit as we South Africans like to say.”

“Going into the weekend I felt a lot more one with the car and team. Friday practice we had 4 sessions to learn and adapt to the car. All in all, we showed great potential to run with the front runners.”

“Unfortunately the whole weekend I had engine issues which resulted in me losing lots of time down the straights. It was tricky in the races to defend but I had so much fun racing wheel to wheel with the guys. The chassis setup was also perfect and it made the car a joy to drive.”

“Overall I learnt a lot and am really happy to show that I can run with the front runners of the British National Championship.”

“I have to say a massive thanks to Investchem, Sparco, Ravenol, Ian Schofield, RDSA and Kevin Mills Racing for all the hard work throughout the weekend.”

“And most importantly to my family for the amazing support and giving me this awesome opportunity!”

WRAPPING UP AN UNFORGETTABLE WEEKEND

Rackstraw will definitely remember this past weekend and it will surely be right up there with some of his fondest racing memories. It was a fantastic weekend throughout and the experience gained can’t be compared to any other, all made even more special by some die-hard local South African support as shared by LMP3 driver Nick Adcock on social media.

The South African continues to impress on International soil and we can’t wait to see what is in store for the youngster who continues to have a bright future ahead of him.

If you missed the live stream of the race then be sure to go check it out by clicking below!

Next up in Rackstraw’s racing chapter is East London for some more GTC action. Stayed tuned for further updates.