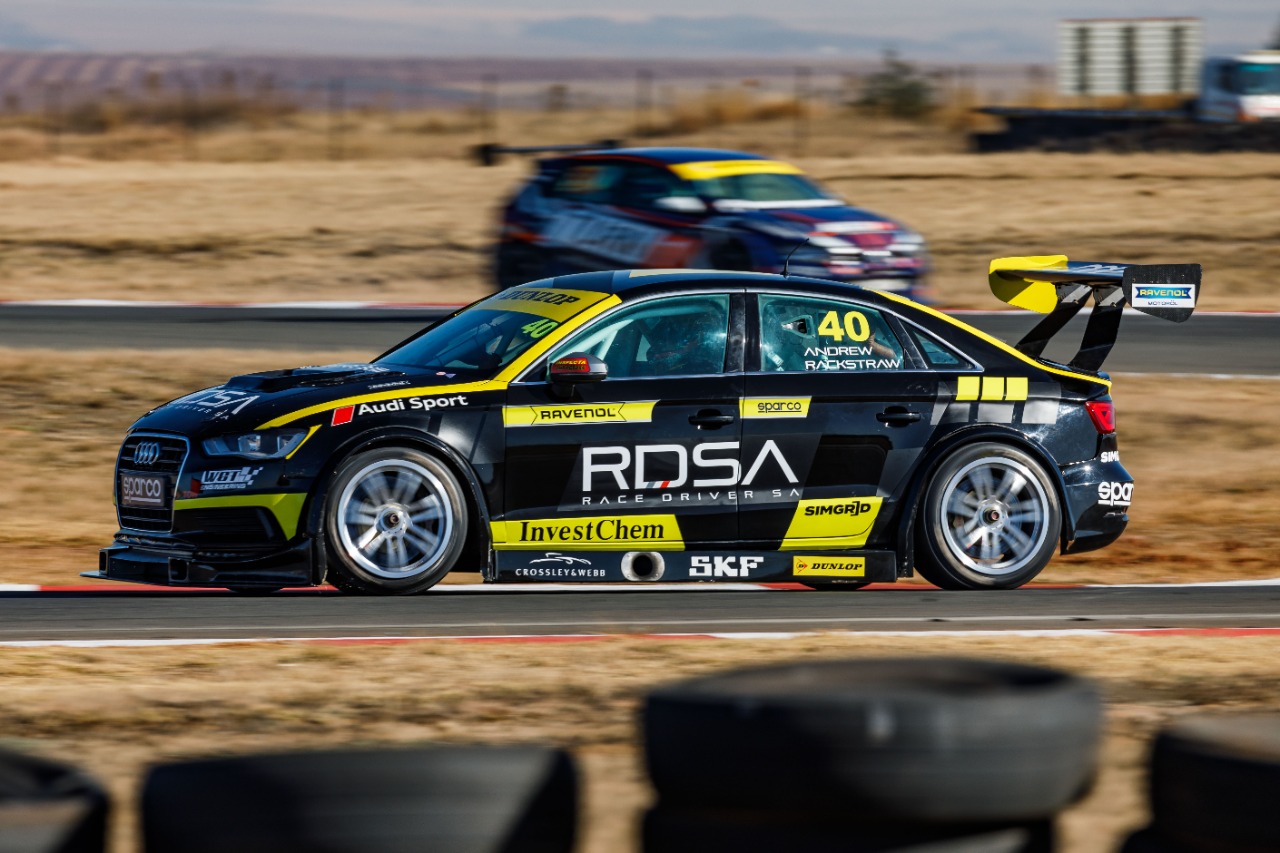 Andrew Rackstraw completed his 4th raceday in his RDSA Audi S3 GTC car over the weekend. As predicted Red Star Raceway threw up some challenges, but the rookie held his head high and rolled with the punches.

It was a weekend of some serious highs and lows and packed with lots of drama. The 20 year old driver from Cape Town said it was one of his toughest race weekends in his career so far but he is grateful for the experience gained. It’s through the tough times we learn what we are what of and Rackstraw certainly gained some respect throughout the paddock for the way he carries himself.

Just when the car looked to be on the up, more issues resurfaced. In practice, Rackstraw really tried his best to get a handle on the car but at a track like Red Star, with 14 corners, all chassis issues will be exposed. From Practice 1 it was back to the drawing board to find the best setup compromise for the car and driver. Lots of changes were made as the WCT worked tirelessly to provide the best package possible. With the feedback from Rackstraw’s driving and the data at hand, they were able to find over 2 seconds from practice 1 to practice 3.

In Qualifying, it looked a million times better as the young speedster was able to set his best lap on lap 2 and it put him in P5, just 1.1 seconds off the pole time. Definitely his best effort of the weekend. It looked promising that the car was finally unlocking some of its potential even with the extra weight on board.

Race 1 went lights out and Rackstraw got swallowed up on the start but fought for every inch on the track. As the laps ticked on he found himself in a very entertaining battle with his WCT teammate Mandla. The pair duked it out for many laps going side by side and running in very close proximity to each other. It was great racing which unfortunately came to an end when Rackstraw picked up a braking issue in the car. You never want to feel your brake pedal go to the floor in a 1.4-ton race car and that is exactly what happened. Luckily he was able to nurse the car to the finish by pumping the brake pedal to get it to work in the braking zones but he didn’t take any chances by braking where he normally would. After the race, the team found lots of air in the braking system but managed to fix the problem for the next race.

With the brakes now working, Rackstraw started on pole position for Race 2. He got the perfect start and by the start of lap 2 found himself well ahead of the drivers behind. It finally looked like the Audi had some pace and you could see the determination as Rackstraw set off into the sunset.

Things took a turn for the worst on lap 4 and it was gutting to watch. Slowly the Audi started losing power and he knew that something was wrong as some strange noises were coming from the car. In one lap all the hard work was undone as he went from 1st to 6th place. The car sounded awful when coming past and it was guessed that the turbo pipe had come off.

Again Rackstraw nursed the Audi home to take P6. The post-race investigation revealed that the manifold pipe for the turbo, which is cast out of steel, had cracked almost in half, which means that the turbo was not operating at all. The power loss was significant and why Rackstraw lost all those positions.

“It was a big learning weekend. Unfortunately in GTC it was not our weekend. With the first race, having air in the brakes, so having to manage that. In the 2nd race we got a great start, pulling a gap from second and then unfortunately a couple of laps later the manifold to the turbo broke completely, meaning I had to nurse it home. All in all, I learned a lot and made big steps forward in terms of chassis.”

“Congrats to Robbie for extending the championship lead, and WCT for all the hard work.”

“I also want to say a huge thanks to my family, friends and all the supporters who stuck by me through the tough weekend. It’s really appreciated and the crowd turnabout at Red Star was amazing! Lots of hard work needs to be done before East London but I’m ready for the challenge that lies ahead.”

Rackstraw has a much-needed break before he sets out racing again.

He will be using his time wisely to catch up on his studies and recharge for the next one.

The next round will be at East London in August where we will see the fastest speeds recorded of the season at South Africa’s very own temple of speed.

Stay in touch and we will see you there.