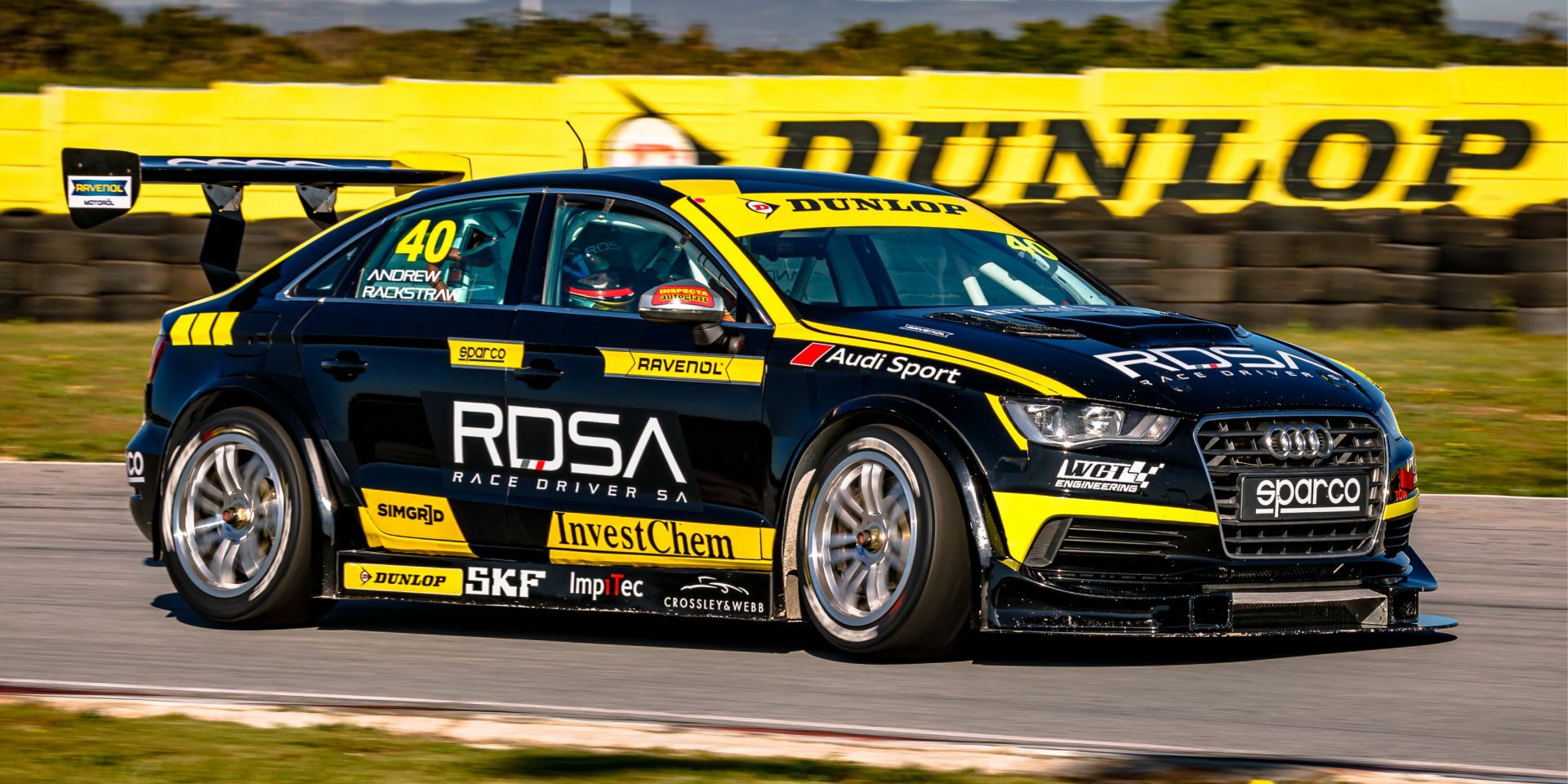 It was a tough yet positive weekend for RDSA driver Andrew Rackstraw, who showed resilience and determination during his 3rd ever GTC outing in the Audi S3.

The Aldo Scribante circuit is a challenging circuit to tackle and passing is near impossible. This made Rackstraws’s task that much harder. Considering his limited experience in the series and in the car, the talented youngster did very well to defy all odds.

With 3 practice sessions, qualifying as well as 2 races to cover, let’s get stuck into the action as it unfolded.

Every race weekend presents its own new set of challenges, be it car related or track related. In the first practice session for Rackstraw, it was all about getting himself back in the groove and acclimatizing to a track that he has never driven a GTC car at. The fast flowing nature of the circuit requires serious commitment and confidence from the driver straight off the bat. Something that’s not easy to produce in your rookie season. After practice 1 Rackstraw found himself 1.2 seconds off the pace.

With a quick look at the data, it was helmets on once again for practice 2 and 3. The next 2 sessions were much better and very promising for the Audi driver who got within 6 tenths of the fastest in practice 2 and then in the last session put in his lap of the day to go only 3 tenths off the top time.

Saturday morning dawned, with qualifying and 2 races up next.

The WCT team bolted on Rackstraw’s new tyres for qualifying and set him off. Having very limited experience on the new tyres around the track, Rackstraw struggled to extract the maximum out of the package but still managed to grab a solid P7 lining up just behind one of the factory VW cars.

As the cars lined up side by side for the rolling start of race 1, you could really feel the tension and excitement in the air. The racing has been really close so far this year and this would be the first race done with the new BOP settings.

Rackstraw took off like a rocket and stayed right in the mix, picking places while others dropped out. Showing a really good head on his shoulders, he brought home a very deserved P5 ahead of one of the Toyota Gazoo Racing cars that pushed him hard to the end.

With the P5 finish, it would give the young man his 2nd front row start of the season in race 2.

Unfortunately, race 2 would not live up to the hype, as an almost guaranteed P2 was thrown away with an engine misfire that hampered the car’s performance drastically. The team instructed Rackstraw to stay out over radio comms, so he nursed the car around until the checkered flag came out. He finished a lap down on his rivals but showed lots of heart to never give up.

“For myself and the team, this weekend showed massive character and a never die attitude. With the new BOP, the car showed great promise and amazing steps forward were taken as a team. Even though we dealt with issues in race 1 and race 2 with misfires, resulting in me limping home to the finish line in race 2. We had a massive leap in development in terms of setup and understanding of the car. As a combo, the team and I are both learning as I am a new driver and it’s the first time the team are running the Audi. I want to say a massive thanks to WCT for all the hard work this weekend, and for never giving up. We can take out a lot of positives this weekend, and I look forward to the next race! A huge thanks also have to go to all my sponsors, Sparco, RDSA, Investchem, Crossley and Webb, SimGrid, Ravenol and Racebook. Lastly, I would like to thank my family for the continuous support and my grandparents for coming down to support me. It means the world to have such an amazing family who continue to support me as I chase my dreams.”

The RDSA Audi GTC man will be back in action at the next WPMC Karting Regionals in 2 weeks’ time.

He also returns home to focus on his studies as he has exams coming up. A lot to juggle with all the travelling in such a little time, but that’s the life of a racing driver.

Keep up with the latest news from the Rackstraw and RDSA camp by checking out his website as well as following him on his various social media platforms.

In closing, the RDSA Team and Rackstraw family would like to extend their deepest condolences to VW Motorsport and the families of the employees that lost their lives. The loss of life will be hard felt throughout the racing community and we wish their families all the best through what will be a very difficult time. We hope the VW team recovers quickly from the losses they have suffered.